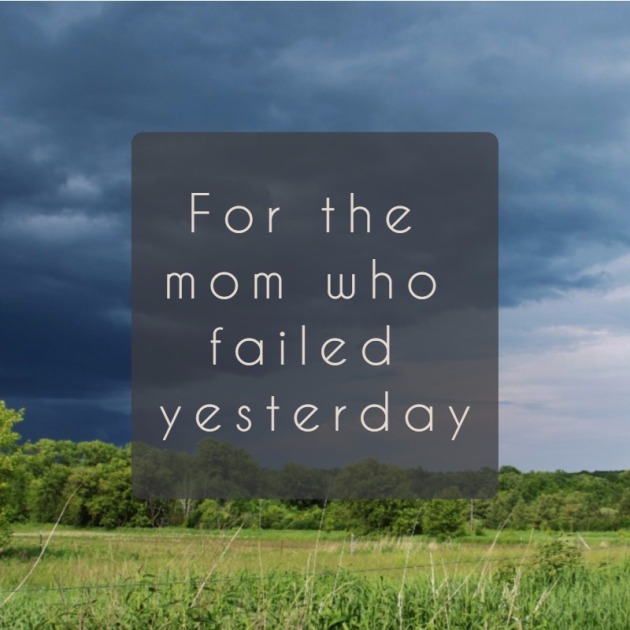 Maybe it started off so well. Maybe you put real breakfast on the table for the first time in awhile, and knowing that you and your kids ate something besides sugar covered corn bombs for breakfast felt, somehow, refreshing.

Maybe you picked up the house the night before and awoke to a clean slate, a day of possibility.

Maybe there was the thick aroma of dark coffee.

Maybe your eyes found the sunlight through this morning’s windows and felt the promise of new mercies for the day.

Maybe it was all going along just perfectly…

Maybe you forgot an appointment and felt like a complete dolt for yet again unsuccessfully straddling your schedule.

Maybe you had to rewash the same pair of pants you just washed yesterday because someone’s diaper leaked. Maybe there was another pair of wet jammies and sheets. And another few loads of tiny clothes that seemed to mushroom in every corner of the house, no matter how many times you picked them up.

Maybe you remembered a relationship that was off kilter, a wound still full of sting.

Maybe your littles managed to make a mess in every room of the house before 9:30 am.

Maybe it felt impossible to say good things because everyone seemed to need correction.

Maybe there wasn’t much food around because last week’s meal plan was for last week, and you didn’t get a chance to go to the grocery store yet. Or maybe there was never a meal plan in the first place, because you can barely keep up with the constant requests for snacks, much less think that far ahead.

Maybe you longed to ward off the loneliness, the kind that makes no sense in the mothering journey when you’re surrounded by children, that crept in as you washed yesterday’s dishes and stacked them up haphazardly to dry on their own.

Maybe your phone dinged, and you picked up it up hoping for a post or message from a friend, only to find that your Flashlight app was done updating.

Maybe there was angst and noise and constant movement and it started to wind you up tighter and tighter as the hours slowly slid down the wall of the afternoon.

Maybe all you wanted was an unsuspicious silence.

And maybe all those things started swirling up and threatened to topple you, head over heels, off the rest of the day, even though there were still plenty of hours left that you had to manage, especially the ones containing bedtime, and it all started to feel impossibly difficult and when, for the love of Pete, were you ever going to just. get. it. right?

Maybe you sat in the rocking chair at bedtime and sang the extra lullaby.

Maybe you dug through the backpack and repacked clean gym clothes.

Maybe you stroked the perfect silk of someone’s hair an extra minute or two because they told you it felt so good.

Maybe you caved and read just one more story, even though you’d already read four.

Maybe you remembered the child who had a nagging cough, and managed to find the cough syrup now instead of in the middle of the night when the hacking started.

Maybe the words I love you mama relaxed the wrinkles you didn’t know you were holding in your brow.

Maybe you walked a little slower down the hallway or the stairs, just in case someone called for you one last time.

Maybe motherhood wasn’t as easy as it looked when your mom stood at the counter making dinner, folding clothes, pulling weeds, buying groceries. Maybe it’s because she wore it better.

Or maybe it’s because we were too busy with the stuff of childhood to notice the raw mechanics of life in place all around us.

Maybe that was okay.

Maybe it will still be okay.

Maybe those mercies will be new again today.  Maybe that’s simple, or feels trite, but maybe that’s all the hope we need to start in yet again, the possibility for failure notwithstanding.

PS. New Header! Christine over at JoyNoelle Photography captured some perfectly amazing moments with our family last weekend, and this photo was exactly what I have been wanting as a feature image for a long time. Stay tuned for more fun pics from our session and a glimpse into the reality of getting six people to smile for the camera all at once.

One thought on “For the mom who failed yesterday”

Join the conversation. What do you think? Cancel reply